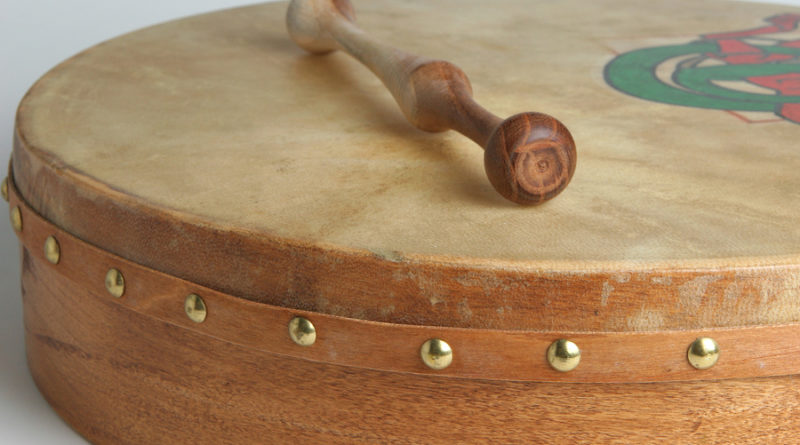 Bodhran (correctly pronounced as “bow-rawn”) also very widely known as the Irish drum, is a typical Irish frame drum that comes in about 12 to 18 inches in diameter usually, however different musicians like different altered sizes as well, the Bodhran provides flexibility to be altered in size as according to the requirement by the music lover using it. Normally its frame is about 4 to 8 inches deep with a typically hard body that is either a wooden or plastic circular piece. Traditionally goat skin has been associated with the Bodhran the most, but modernly people have come up with Bodhrans manufactured from other animal skin as well that performs just as good. Some other synthetic materials have also been used for the skin replacement as well.

There are customization options available that are achieved by fitting a crossbar or two at the back side of the Bodhran that aids in fine tuning the music output. A hex key is used by the player to either tighten or loosen the skin on top to further fine tune the music output, however that may highly depend on the weather conditions as well (as odd as it may sound). The two options are termed as tacked Bodhrans and tunable Bodhrans. The Irish Drum may look as an easy instrument to master at first glance, but there is a rather lengthy learning curve in order to master it fully. The hand placed at the back of the Bodhran and on the opposite side of the skin and the timber helps to achieve the required pitch from the drum as well. The tipper striking the tightened or loosened skin produces the sound of music.

History of the Bodhran

To this day the debate on how the Irish Drum was invented has not settled. Many people also believe the Bodhran to be a relatively newer instrument than some historians might suggest. However no one argues with the rapid boost in its recognition during the 1960’s Celtic Music revival. Being particular about it, Irish musician Seán Ó Riada used the instrument very effectively and inspired many people by his usage and efficiency with it. Prior to his contribution it was played only in the streets or unofficial small gatherings by younger boys and not very efficiently as well. However according to a theory proposed by the Irish Music magazine’s editor Ronan Nolan the Irish drum evolved from the invention more commonly referred to as the “poor man’s tambourine” that was constructed from machine parts of a farm and cymbals commonly seen on tambourines were missing.

Contrary to that theory, the ancient painting by Dan Maclise who lived between 1806 and 1870, clearly highlights this Irish Drum charming the people at a Halloween party. However that painting shows the Bodhran played with bare fingers and hands rather than the modern tippers or beaters.

What Does “Bodhran” Actually Mean?

Just as imagined, the word “Bodhran” is an Irish word that is derived from the old Irish word Bodhar that specifically means Deaf or Dull. There is another belief that puts the meaning of the word to be skin tray because of its probable origin within the agriculture industry. Regardless of which one is the right one, this Irish Drum that is regarded as the tambourine replacement by some has engraved its name on the Irish Traditional Music, even more so since the 60’s as well as some neighboring countries as well. In southern England however, a very similar instrument exists by the name of “riddle drum” also lesser known as “crowdy-crawn” and has outstanding similarities to the Bodhran and has become one of their most loved music instruments as well.

Alterations in the Irish Drum and the Modified Versions

People with more knowledge started enjoying the Bodhran since the 1960’s and during this period many slight variations have been brought in to further improve the quality of music produced. Presently you will see a lot of Bodhrans with insulated edges that help in cutting out the unwanted tones produced by vibrations of the skin. Commonly electric tape is used for the insulation because it gets stretched easily being made from rubber.

The music adjustability has been brought in more recently as well. Skin of the modern Bodhrans is fitted with screws that allows for the skin to be tightened or loosened according to the requirement. Expert players adjust the tension in the skin according to the atmospheric conditions and benefit from that greatly.

The typical Bodhran is played with a small piece of crafted wood that is called the tipper. The tipper is responsible for producing the top quality music from the skin when it hits the surface as intended by the player. History has it that the very first tippers were created from animal bones, this falls in line with their usage as war drums for signaling alarms and to call attacks.

The 1960’s revolution concerning the Irish Bodhran lead to many newer styles to play it. Major players like Tommy Hayes and Abe Doron introduced many new techniques that are both revolutionary and very successful. However some very common factors in most of these newer techniques is that they are performed on smaller in diameter by deeper drums that also use a thinner skin than usual, a straight tipper that focuses mainly on the top of the drum is used usually with these as well.

Some very sophisticated techniques have also been developed that additionally prompt the player to follow given tunes. This factor alone has been declared by many as the “rebirth of the Bodhran”. Popularity of these newer techniques is not bounded to the Irish only, it has spread to all over the world recently and newbies are even taught the instrument using these newer techniques rather than the older traditional ones.

Traditionally it was not as easy as it is today to get an Irish Bodhran in your hands, however boosted by the increased number of music stores in Ireland and all over the world and also the great number of online sellers, your can easily find an Irish Bodhran for Sale at various town center or downtown stores or even Buy Bodhrans Online from the numerous online stores as well. However in the case of purchasing from online sellers, we do highly recommend that you check for quality first from the online reviews of the products by the store you are purchasing from, this can be important so do this carefully.